IT @ It's Best in Ghana, West Africa ,Africa and the World

Undersea cable cut to slow down internet for India, Pakistan, Egypt and other countries for upto 30 days

Users in many countries are experiencing extremely slow internet connection since past few days, thanks to an major undersea sub-continental cable cut. The most affected countries include India, Pakistan and Egypt where internet connectivity to content hosted in Europe and US is almost unaccessible due to slow speeds. Egyptian navy has arrested three divers sabotaging the SEA-ME-WE 4 undersea cable - one of the major data traffic route connecting Asia and Europe with 14 countries, running from France to Malaysia and linking Italy, north Africa, the middle east and the south Asia. The damage to this major data pipe with reportedly two others have cause severe internet speed degradation for users in India, especially for customers of BSNL, MTNL, Bharti Airtel and Tata Communications and are supposed to be disrupted for the next 20-30 days. While the extent of full damage and situation is still being assessed, Rajesh Chharia, president at Association of Internet Service Providers of India explained : "Currently, internet and data usage are low because of the festive season. India will feel the impact from Monday when offices and businesses come back. Telcos have diverted all traffic from the Atlantic route to the Pacific, but our connectivity to the latter route is not sufficient to cater to all of India's traffic. 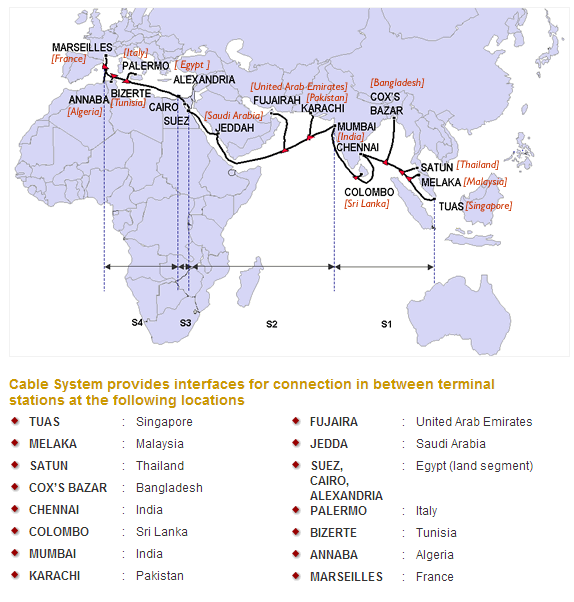 Oops, you forgot something.

The words you entered did not match the given text. Please try again.

Silent CarriersÃ¢?Â¿ Are Helping Spread The Coronavirus. HereÃ¢??s What We Know About Them.
by [email protected] | 1 comment

Loss of Smell Isn't Just a Coronavirus Symptom. It Could Be Key to Slowing the Spread.
by [email protected] | 0 comments

Start a Free Blog at Webs.com